News and Updates from Cambridge University Sparrows.
CU Sparrows / News / A new decade of Past versus Present

A new decade of Past versus Present

The 71st Past versus Present
Cambridge, Saturday 15th February 2020

The traditional match between a Present VIII and a side representing the Past produced a large win for the Past, who had too much experience for a young Present side, running out victors by 321-138. Captain-for-the-day Laurence Cook carried off the Trapnell Tankard.

On Court Three 5 ladies under the captaincy of Holly Nugent took on a 5-strong team of past players in an exciting contest which finished in a narrow win for the Ladies Past by 169-161. Captain Helena Tunks received the Silver Sparrows Jug.

Even closer was the Mixed Doubles match, which was won 41-39 by Savanna Leboff’s team.

In all 50 people subsequently gathered in the Pembroke College Bar and then in the Old Library for the 71st Jock Burnet Dinner. After a few words from President Bob Dolby there was an upbeat report on the season from Club Captain Ashwin Ahuja. The 90th Varsity Match follows in a week’s time. 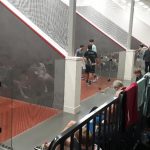 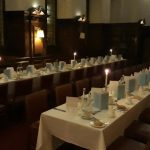 The Old Library at Pembroke College